EMERGENCY ALERT City Hall Closed to the Public Read On... 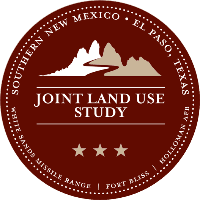 The Southern New Mexico – El Paso, Joint Land Use Study (JLUS) is a cooperative process among the public, city, county, state, federal governments agencies, and the military installations of Fort Bliss, Holloman Air Force Base and White Sands Missile Range. The study looked at issues such as land use, economic development, infrastructure, environmental sustainability, and the operational demands and mission changes of both military and civilian entities within the six counties of Doña Ana, Lincoln, Otero, Sierra, and Socorro in New Mexico and El Paso County in Texas. The intent of the study is to highlight common interests between the Department of Defense and civilian investments and missions as they affect economic growth, more efficient infrastructure, healthier environments, and an improved quality of life.

Use the map to explore land use information, including base maps, land ownership designations, state leases, and military uses.

Land Use and Energy Planning Tool